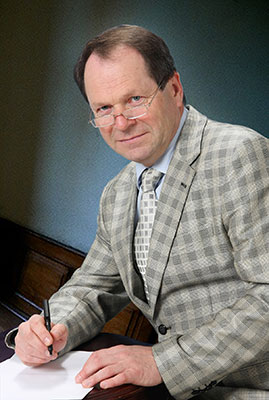 Prof. Volodymyr Pankiv is a Director of Department of Preventive Endocrinology at Ukrainian Scientific and Practical Centre of Endocrine Surgery (Kiev, Ukraine) since 2006. As an academic leader in endocrinology in Ukraine, he is the member of the editorial boards of Ukrainian journals including «Clinical Endocrinology and Endocrine Surgery», «Problems of Endocrine Pathology», «Diabetes, obesity, metabolism», «Ukrainian Journal of Pediatric Endocrinology», «Bukovinian Medical Herald», «Practical Angiology», «Pain. Joints. Spine». He participated in the development of national health industry standards, i.e. Type 2 Diabetes mellitus. He is the editor-in-chief of the book Hyperthyroidism in Clinical Practice. He is the contributor of six monographs including Type 2 Diabetes Mellitus, Practical Thyroidology, Iodine Deficiency Disorders. He also authored some books for the general public in Endocrinology. He has an extensive international record in diabetes, thyroid pathology and iodine deficiency disorders research, particularly in epidemiology and public health.

Professional and other memberships profile Member of European Association of the Study of Diabetes (EASD) since 1994 Member of European Thyroid Association (ETA) since 1998 Member of National Union of Journalists of Ukraine (since 2008) Awards Dr. Volodymyr Pankiv was granted the title of Honored Physician of Ukraine, according to Presidential Decree in 2000. By this decree President of Ukraine awarded V.Pankiv for significant personal contribution to development of the Ukrainian health care system, provision of skilled medical aid and high professional mastery.

His Last name was published in the reference books: - the International Biographical Center of Cambridge: International Health Care Professional of the Year 2005 (2005) - Who’s Who in Science and Engineering (USA, 2005-2006) - Honored Names of Ukraine. Elite of the State. Tom IV (2017) On the version of magazine «Focus» (December 2009) V.Pankiv is included to the number of 50 the most prominent practical physicians of Ukraine.